Richard’s Log, Stardate 2457169.5
Today’s destination is the Recap for the 6th Dutch PowerShell User Group 2015.
Now in my hotelroom nearby Schiphol, rethinking all the awesome content I saw today, and the great talks from IT PROFESSIONALS like:

And last but not least, the absolute IT rockstar:

The day kicked of with a short keynote from Jeff Wouters. He was allowed to give away some prices from the sponsors, like a discount on software from Sapien Software, and a free license for the Sapien Software Suite. He also gave away a license for ISESteroids from Tobias Weltner.
After this it was time for the first session of the day, and this session was all about the cool stuff you can do with OneGet (now officially called PowerShell Package Manager); which is a ‘package management manager’. It allows you basically to do what was already possible in *nux systems for years. That is, grabbing and install software packages from either external or internal repositories. For a deep dive on Package Management I would recommend you to watch this great MVA course: Package Management and Workflow Automation
Next up was a session from Bartek Bielawski on making WMF4 acting like WMF5, in terms of partial configuration. He showed us a solution based on AST (Abstract Syntax Tree). Bartek wrote a nice article on AST a while back, check it here: Hey, Scripting Guy! Blog. Bartek will maybe share the code which he showed to us, depending on the permission of his company. Keep a eye on this, highly advanced stuff!
After this Ben Gelens went crazy on the topic of ‘Lessons Learned: Introducing DSC Configuration into an existing environment’. He went deep into the security considerations of setting up a secure Pull server, with very sleek demo’s. He showed us how to secure the complete communication, based on certificates, between the LCM and the Pull server. I think this session was recorded, so hopefully we get the chance to see it online somewhere.
Stefan Stranger went up next, on the topic of Azure Extensions, and on the DSC Extension in particular. This was a nice session to see, on how to use DSC on Azure IaaS VM’s. Quite easy and straight forward. I recommend you to read more about this in this blog post: Introducing the Azure PowerShell DSC (Desired State Configuration) extension.
Next was a session from Jeff Wouters, on a solution he made himself, called ‘MONK’. I’m not sure if I can elaborate on this, but it’s a very interesting solution for consultants. I recommend you to contact Jeff for more about this.
Also Jeff showed us a nice demo of ISESteroids, a must-have tool for any serious PowerShell professional! It provides great features like autoindenting, refactoring, a function browser and much and much more. Check out the website from Tobias: ISESteroids
For the last session of the afternoon we had Bartek again, on using DSC in Linux. Man, what a superb session was this! Bartek showed us how to install the OMI package, in order to be able to talk to a Pull server. I recommend you to start with this blog post from Bartek: PowerShell DSC for Linux Released
In the meanwhile, Jeffrey Snover also entered the building. I have to say, that was a exciting moment for me, to meet the man in person. Jeffrey is a idol for me, he has a inspiring influence on me. The man just does a fantastic job at Microsoft. During dinner we talked a bit on adoption of PowerShell in general. The point made by Jeffrey was that either a SysAdmin learns how to use PowerShell, of gets into the lumber business. 😉 Also he had a nice argument on security in PSRemoting; why you would not trust PSRemoting, while you do trust other Management products? Something to think about, the next time you have a discussion again about security in PSRemoting.
After dinner it was time for Jeffrey to deliver a session. He did it in the format of Q&A, which is working really well in small groups I think. He fired up PowerShell ISE as his ‘notebook’ (what else 😉 ) and started with the question: “who has a question?”. And he started jotting down all the questions which came from the audience. The questions were these: 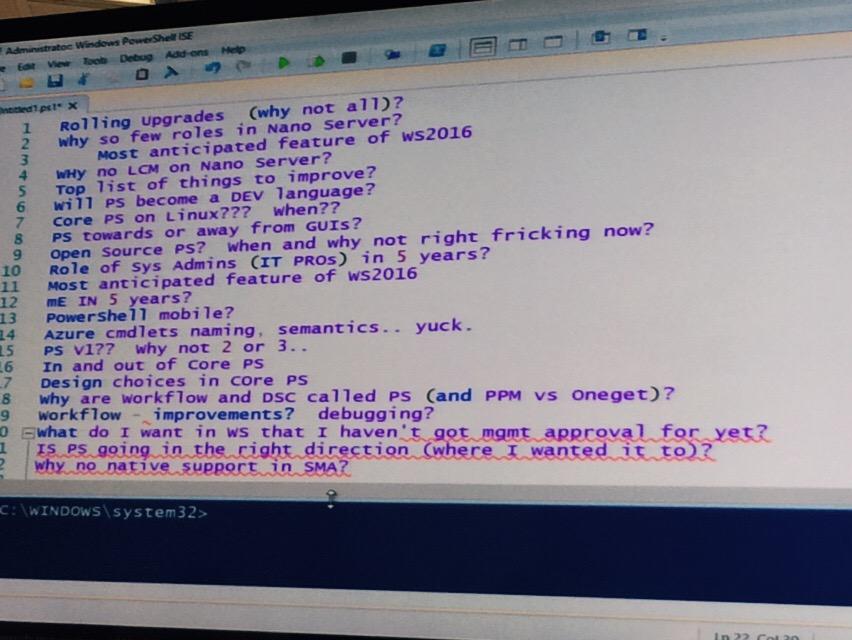 Jeffrey then elaborated on these questions and made a nice comprehensive story of it. Jeffrey can present, for sure! If you want to have the answers he gave to the questions, I’m sorry, but I didn’t note those answers down. One big takeaway from this session is that when you buy new server hardware, make sure the NIC is RDMA enabled! This will greatly improve the overall speed of the hardware.
Last but not least, we got some nice stickers from Jeffrey:

Jeff also mentioned for me that we are doing a project on putting up the PowerShell Manifesto on Penflip. I uploaded the whole manifesto, and soon you will see the annotations coming from Don Jones and Timothy Warner. You can also make your contributions, just go to the Penflip project page Monad PowerShell Annotated, and help us out with extending this document with explanations and links!
I would recommend you to go to the next DUPSUG meeting, should be somewhere in Q4 this year.
That’s it for now folks! Live long and prosper!