Last year’s PowerShell + Devops Global Summit was a roller coaster.
On one hand, I spoke for the first time – it was terrifying. Getting up in front of a local user group had helped, but it’s not quite the same as a room full of PowerShell-ers, including MVPs and PowerShell team members – eek!
On the other hand, I was lucky enough to host the Community Lightning Demos. We managed to give 22 folks the chance to get up in front of the PowerShell community and give a quick, low-pressure ~10 minute demo.

How did it go?

Presumably it was a success! We got to see a variety awesome demos, folks got a taste of speaking in front of a summit crowd, and almost 10 lightning demo speakers are presenting full sessions this year.  Here’s a glance from Trevor: 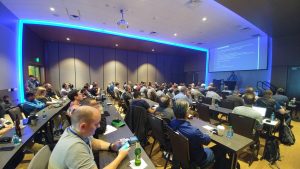 The demos are back again this year, with a few changes thanks to your feedback and the help of Don, Richard, and others:

So! Start thinking about what you want to demo. The specifics will change, but the gist of this bit on the 2017 Community Lightning Demos may help, including an example demo on PSDepend.

What if I don’t get picked?