Back in… gosh, 2009, 2010 or so, an Arizona company named NetPro hosted PowerShell Deep Dive, part of their The Experts Conference event (the first was held in Las Vegas for just 50 people). After hosting two years (I think) though, NetPro was purchased by Quest Software, which moved to close down TEC. I may have those years slightly off, but that’s the general sequence.
In 2012, myself, Jeff Hicks, Richard Siddaway, Jason Helmick, and Kirk Munro had formed PowerShell.org, attempting to make good on the basically-defunct PowerShellCommunity.org that I’d started and that Quest now basically owned (and was shutting down).
In August 2012 Jason and I were out in Redmond for a TechMentor conference, and… 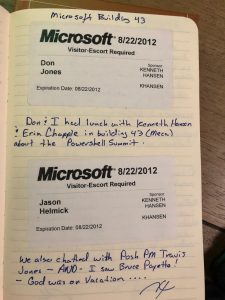 Erin Chapple and Kenneth Hansen, who were running the PowerShell team at the time, asked us over to building 43 for lunch one day. They told us that community engagement was huge for them–they needed to know how people were using their product, and what they needed to focus on. They got plenty of engagement at TechEd events, they said, but it was largely beginners; they needed the Deep Dive, or something like it, to stay in touch with hardcore users.
In April 2013, the first PowerShell Summit was held.
“We can’t give you any money, though,” Kenneth said. And for good reason: they wanted an event that could sustain itself, so that when Microsoft inevitably reorganized and got distracted, the event wouldn’t die. To help, they volunteered to get us space on-campus, so our first event was in conference rooms, and they helped guarantee the food deposits. That helped give us a tiny financial pad and some experience, so in 2014 when we moved to Meydenbauer Center, we weren’t a brand-new event with an inexperienced team.
Today, Summit is formally owned by a 501(c)(3) nonprofit, and venue and food deposits no longer have to go on my personal Amex ;). We’ve built enough operating margin that Summit can pay its own deposits until registrations start rolling in, and the event is essentially self-sustaining–we don’t even rely on corporate sponsors, although we’re very happy to have them when we can. We’ve held six events in the US, and two in Europe, which led to the launch of PSConf.eu a few years back.
Jason ran across this page in his journal last night and sent the photo, and with his permission I thought it would be a fun piece of community history to share.